Quick the sun is out. Part 2 of our wet week away…

Day 4 and another tantalising burst of sunshine. Let’s go for a drive along the Esplanade.

We stop at Cotton Tree Beach and settle in to sketch.

I only get a rough pencil outline and the clouds roll in and it starts to rain, again. Oh dear!!! So taking a quick photo it will have to be finished off back home. Just along the road is the Alexander Heads surf club. Almost lunch time. So we settle next to the large windows looking out at the wild wind churning up the surf. With a cup of coffee and cake. Well I had the coffee and cake, Jack chilled out with a couple of beers, we continue our sketching in comfort. 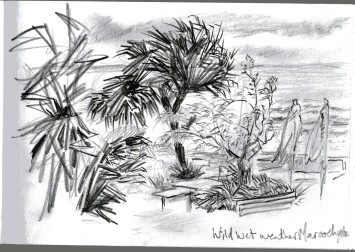 The windows are tinted giving an eerie and cyclonic feel to the scene. Again I did a pencil sketch and finished it back home. On the other hand Jack is a lightning fast artist and I love the way he has caught the wild windy weather. He also did a number of people sketches of the people around us. 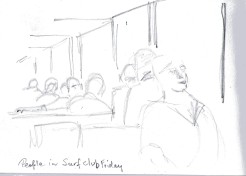 Our styles are quite different…

Then it was into the dining room and we ordered Thai chicken curry, it was very tasty. A lovely relaxing way to spend the day. But then, about 2pm, the rain stopped. So time to walk off the lunch calories, not to mention the cake!

The wind was still strong and my good deed for the day was catching a woman’s hat as it whirled past us with its owner in hot pursuit. I spotted a couple of kite surfers battling the waves and wind. Time to get the camera into action. Can you see him?

As I took photos Jack did another 2 sketches.

It was such a delight to see the sun that we drove down to the end of the peninsular. Jack again sketched. But I was mesmerised by the waves crashing onto the rocks. A magnificent sight and I took shot after shot trying to capture that precise moment of wave and spray as it cascaded into and over the rocks.

The wind is whipping the waves into a frenzy of foam and spray. In the distance is Point Cartwright Lighthouse protecting the entrance to the Mooloolah River.

But look at these 2 brave, or maybe foolish, young blokes. 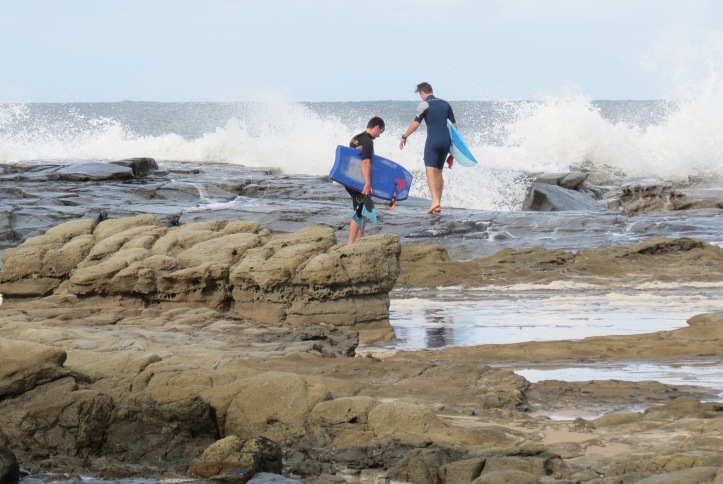 The second surfer stood hesitating for quite awhile, before he launched himself into the wild waves. What dedication to their sport…

But that’s not all that was happening. I walked by this couple being married in a small and intimate ceremony. Only the couple, the celebrant, the photographer and a friend looking after their young daughter were present.

I wished them luck for the future as I passed by and commented that the luck was with them already to be married on, perhaps, the only sunny day this week. They smiled and agreed.

So the week is almost over. Our son and daughter-in-law came to spend Saturday with us, which we spent at the Eumundi Markets, the largest markets in Queensland. I found them rather claustrophobic, so many people, and the camera battery died so I cannot show you how crowded it was!!! I fondly remember these markets from way back in 1986 when they were small and local and we Wwoofed with and helped a local lady with her herbs that she sold there. But that is another story…

The traffic on Sunday was total chaos as it was the weekend of the major triathlon and many roads were closed. We eventually found our way out-of-town and heading in the right direction (thank you Siri) The rain was torrential at times along the motorway and I was so pleased to arrive home two and half hours later.

One big bonus of the rain was the garden looked radiant….