Cyclone Linda whips up the waves

Last night, outside the bedroom window, the cyclonic winds were whipping the fronds of the golden cane palms into a frenzy. I could hear the bats squeaking and squabbling as they tried to feed on the palm seeds and I could picture them hanging on and being lashed around.  I lay in bed and listened to the rumble and roar of the ocean. Another cyclone was barreling its way south along the coast. A couple of days ago Linda had been a category 2 cyclone but now, about 400 kilometres off shore, had been downgraded to a tropical storm. But it still packed a punch and was forecast to deliver a 2 to 3 metre swell.

The rain had been blown away and a sparkling blue sky tempted us onto our bikes and down to look at the majesty of the ocean.

This week it is The first of the international pro. surf carnivals and it is held on the Gold Coast, but about 20 kilometres further south than Burleigh, at Snapper Rocks (image below copied from the media centre)

Just look at the crowds of spectators. As one commentator mentioned “there must be a lot of sick people on the Coast today!!!”

They have been blessed with fantastic dream conditions. Just watch this short video.

Not so crowded on our beach but still people had come to enjoy the sights and sound of majestic nature, and the perfect Autumn weather. 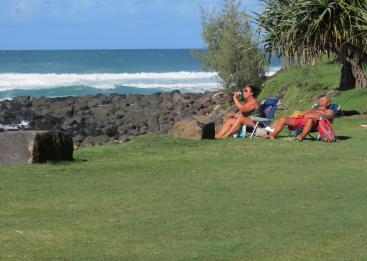 Although it is midweek another wedding is taking place. This is a very popular wedding venue and today they are so lucky to be blessed with perfect weather. 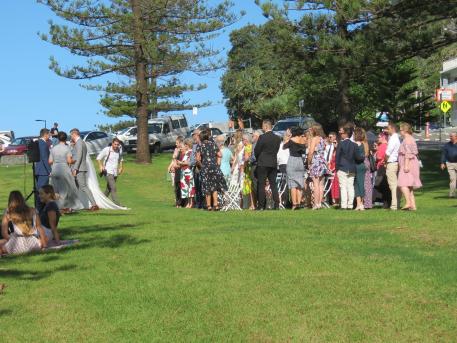 Another small gathering but more formal than the one I photographed last week.

We continued round the Burleigh Heads walk way and Jack found a spot to sit and sketch.

While I scrambled further over the rocks camera in hand and took photo after photo.

Can you imagine the mighty roar and crash as the waves barrelled into the rocks and the wind buffeting and blowing the spray high into the air, it was awesome .I took 164 photos trying hard to capture the breathtaking sight of all this power.

In the distance the hazy outline of the Surfers Paradise hi-rises could be seen.

Because of the dangerous weather conditions the walking track had been closed. But that didn’t stop surfers from scrambling over the rocks to bypass the gate and get to their favourite surfing spots. 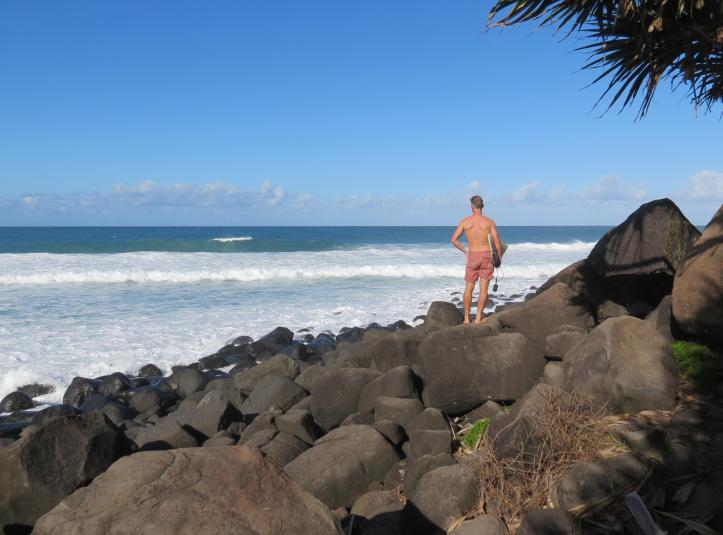 So time to head back home. Jack had done 2 sketches while I was taking the photos. What a satisfying afternoon it had been.

Here I am Jo out walking again now the weather has cooled down and the sun has come out again. Pity it rained all last week…

Pop over to join the ever restless Jo as she shows you a gorgeous and interesting area of the Algarve. But be prepared for a steep climb