Walking in the tracks of a bushranger : Road trip day 4, part 2…

Could not resist stopping at this sign and taking a walk back into history.

Times were difficult and dangerous in the 1800’s. Australia was colonised by convicts and many of these turned to crime when they either escaped or earnt their freedom. Travel could be fraught with danger. Bush rangers stalked the outback roads. Ned Kelly is a well known figure in history and so is Captain Thunderbolt. We had a brief brush with this notorious character when we found his hideout.

He was born Fred Ward, in 1835 to convict parents, worked  at many stations in northern NSW in the late 1840’s, including the famed horse-stud Tocal, and his horsemanship skills soon became evident. Horsebreaking became one of his most important duties. But in 1856, at the age of 21, he is enticed to join a gang of horse thieves. They were caught and sentenced to 10 years in the notorious Cockatoo Island penal establishment, in Sydney harbour.

He is released after 4 years on a ticket of leave. But soon goes back to his bushranger ways and is caught again. This time he makes a daring escape from Cockatoo Island by swimming across the harbour. He is the only convict to escape the island penitentiary. It is now 1863. So at 28 he becomes a hardened bushranger and crowns himself with the nickname “Captain Thunderbolt”

Over the following six-and-a-half years, Ward survived by robbing mailmen, travellers, inns, stores and stations across much of northern New South Wales – from the Hunter Region north to Queensland and from Tamworth nearly as far west as Bourke. He had many hideouts but one of his more famous is this one just outside Tenterfield.

We follow the track leading through the bush and ferns. 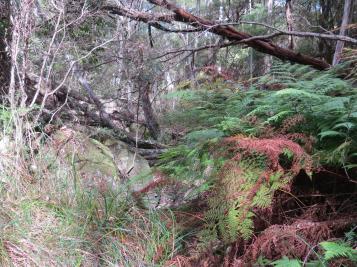 Ducking under fallen trees. The huge granite boulders rear over us.

The rocks are draped with moss and ferns, then we see a narrow gap between two of the rocks.

It leads into a larger cavity. 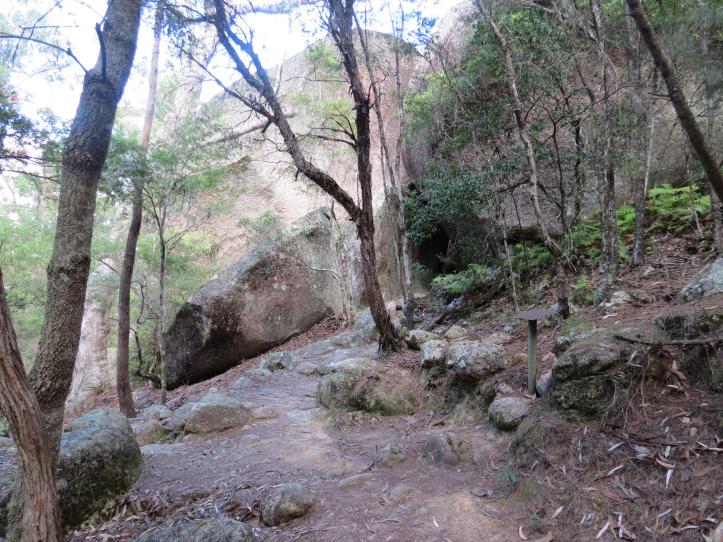 A family with 3 young children materialise from round the corner. It is not hard to visualise desperate men hiding out among these rocks. It now becomes much steeper and tricky to scramble over the rocks.

So I decide I’ve gone far enough. The family tell me there is a good view of the road from the top of the boulders and this is one of the reasons Thunderbolt chose this hideout.

The end came for Thunderbolt on 25 May 1870, at the young age of 35, after robbing travellers near the Big Rock, Ward was shot and killed by Constable Alexander Binney Walker at Kentucky Creek near Uralla. The bushranger had spent his last few hours in and about the Royal Oak Inn, close by Split Rock, at Church Gully. There is much to support a contention that his judgement at that time was impaired by alcohol.

This was a short, but interesting side trip on our way to walk up Bald Rock.