It is a long time since I visited Currumbin Wildlife Sanctuary, even though it is just down the road. But this week the family, 5 grandchildren aged 5 to 16, Mum and Dad, came from Brisbane to have a day exploring the Sanctuary and interacting with the unique animals that call Australia home.

So we went with them.

How it has changed. The car park was almost full and now costs $10, it used to be free, but the money goes toward the maintenance of the animal hospital so that eases the pain of payment! 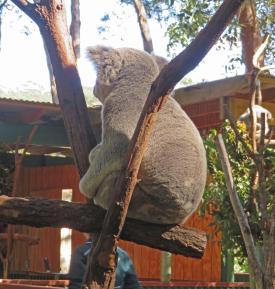 These people are queuing to have their photo taken cuddling a koala and in an enclosure next to the action the koalas wait to be chosen for the next cuddle session.

Many of the koalas in this sanctuary have been brought here for treatment because they have been savaged by dogs or knocked over by a car or orphaned. Urban expansion is diminishing the koalas habitat. Here is an interesting fact about the koala’s diet.

Each animal eats a tremendous amount for its size—about one kilogram of leaves a day. Koalas even store snacks of leaves in pouches in their cheeks. To digest these leaves, the koala has a special digestive system—a long gut— which measures a colossal two metres and is packed with super micro-organisms that detoxify the vegetation.

Out of over a hundred species of eucalyptus trees that grow in Australia, the koala feeds only on twelve, and will only eat leaves at a particular stage of growth. Koalas can easily exhaust its’ own supply. Conservationists have to move groups of koalas to areas where food is plentiful. 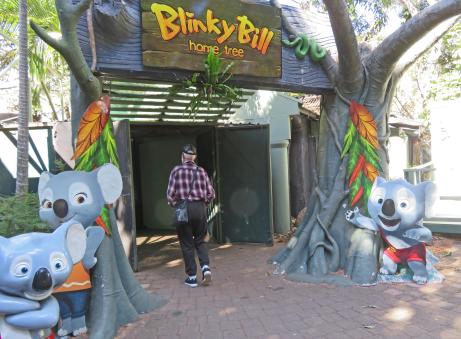 So moving right on we follow the family into this kid friendly area. A large strangler fig tree dominates, but it is all sculptured from concrete. The steps wind in and through, slides tumble-down and swaying bridges challenge. Kids run and yell and have fun. Can you see the 2 people walking up the tree? You may have to enlarge the photo to see them. Meanwhile Jack and I explore the reptile house. Heated glass cases hold some of Australia’s most deadly creatures. 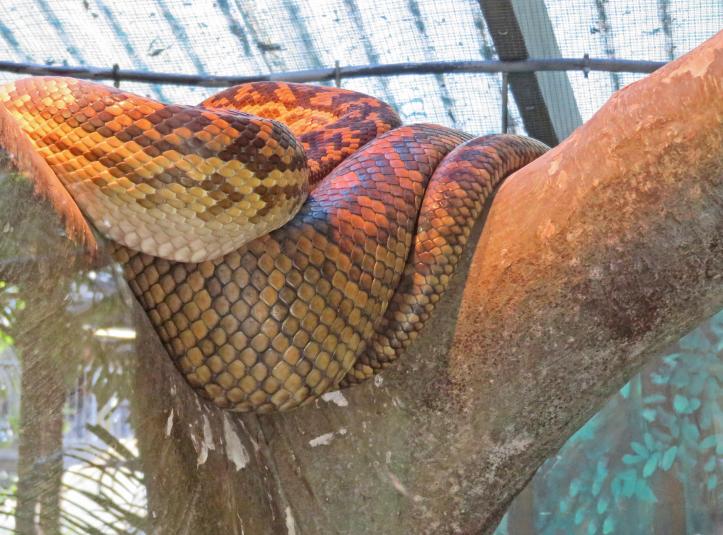 The nocturnal house is next and I grope my way into the darkened building. Gradually my eyes adjust to the gloom and I peer into the glass fronted, simulated forest enclosures. Many Australian animals are nocturnal and in this artificially created night-time they scuttle and scurry around. The Bilby twitches his long ears and in the next enclosure I struggle to see small, mouse like creatures as they run up the tree trunks then launch across open space to the next branch, the sign says “Sugar glider”. In many of the areas I am unable to see anything. Is it my bad night time vision or are the creatures hiding. After peering into more I cautiously feel my way out and take a deep breath as I get back into the fresh air, it was quite a musty, bush like aroma in the nocturnal house.

Wandering along bush lined tracks, over the narrow railway line that has a train to carry tourists round to the different areas, through double entry gates to prevent animals escaping. Into a large dusty paddock.

Kangaroos are lolling around. totally ignoring the activity around them. A single emu wanders by. 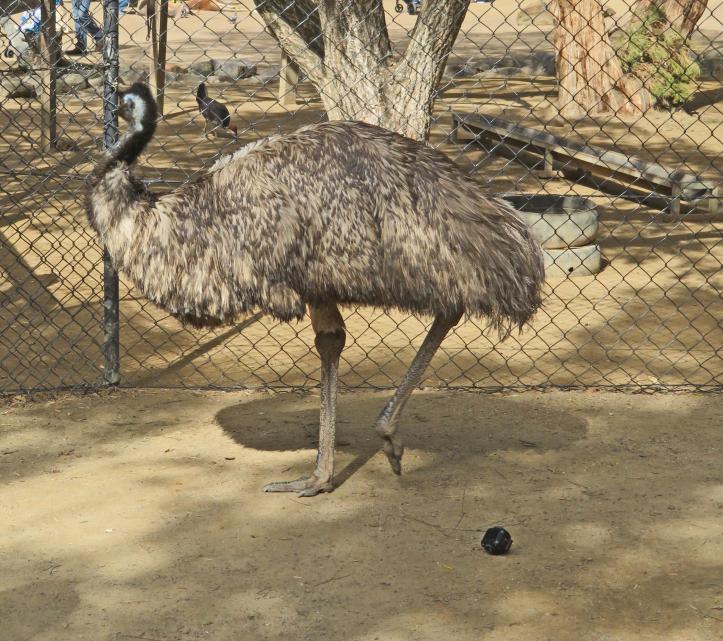 This big Boomer is away from the main mob. 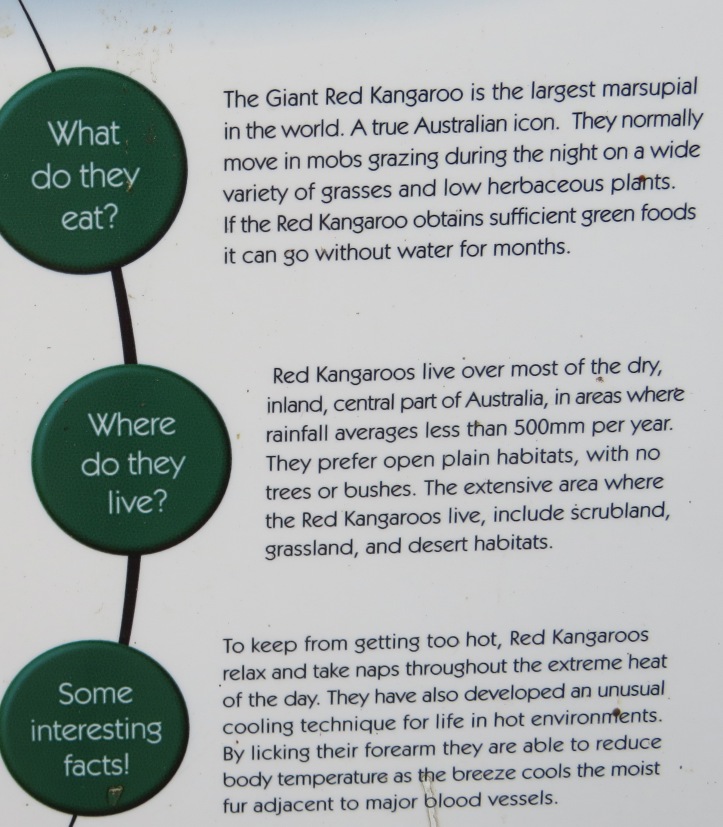 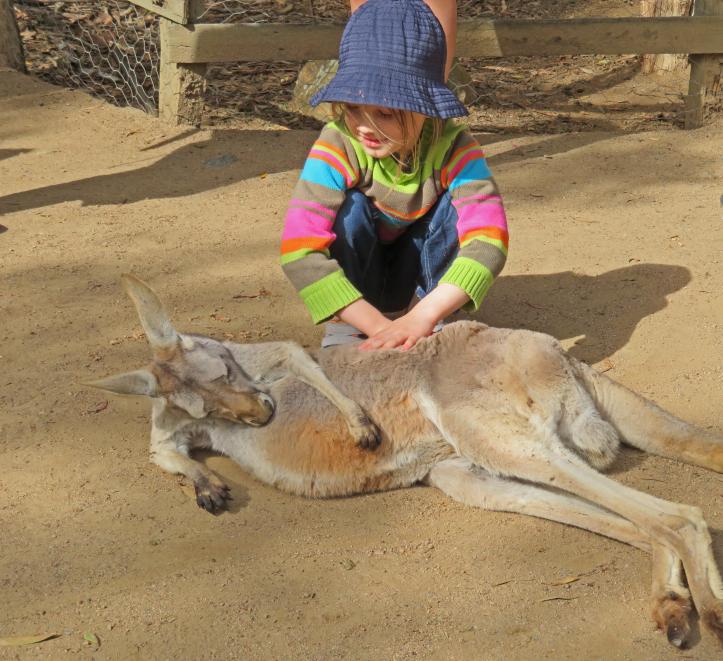 They feel soft and almost cuddlesome to the touch of a little girl. 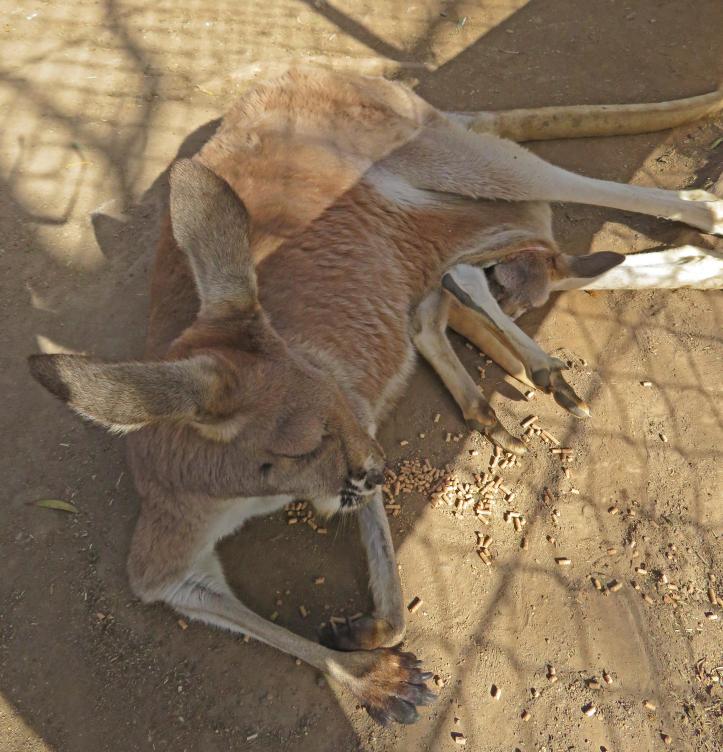 But a volunteer was standing next to this one to make sure no one touched the Joey. Can you see the Joey peering out? The mother can get dangerously protective if anyone touched her baby. It is quite amazing that size baby can fit into her pouch. It must be very uncomfortable.

A number of show and tell performances are scheduled during the day and when we arrived at the crocodile pool to see the feeding the crowd was 6 deep and no way to see or take a photo. We heard the commentary about “Big Boss” the 5 metre croc and his girl friend and heard the gasps from the crowd as the handler fed them, but could only imagine the action. But here is a short YouTube video I found.

So having missed that we went and sat on the grass outside the “free flight bird show” 30 minutes before it started and had a picnic. The children rushed off to see the shearing demonstration while we secured seats as soon as they dropped the chain.

Having seen this show before I didn’t want to miss. But very difficult to capture the birds as they swooped and glided over head catching bits of meat in mid-air. Our beautiful parrots show off their vibrant colours. Actually this is a Macaw, not a native, I don’t know how he got past the casting couch 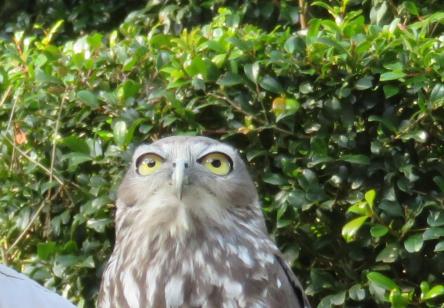 This Barking Owl gave his best dog barking imitation. Then enter the Black Buzzard, an intelligent bird that can use tools to crack this tough shelled emu egg.

I did manage to get a short video of the action

Then the finale was the magnificent and endangered Wedge Tailed Eagle. With a wing span of 6 to 8 feet. Sadly, this magnificent raptor is still subject to persecution, both legal and illegal. It is the only eagle in the world which can still be shot under a damages licensing system which is still operating in Australia as an unfortunate legacy of less enlightened times. 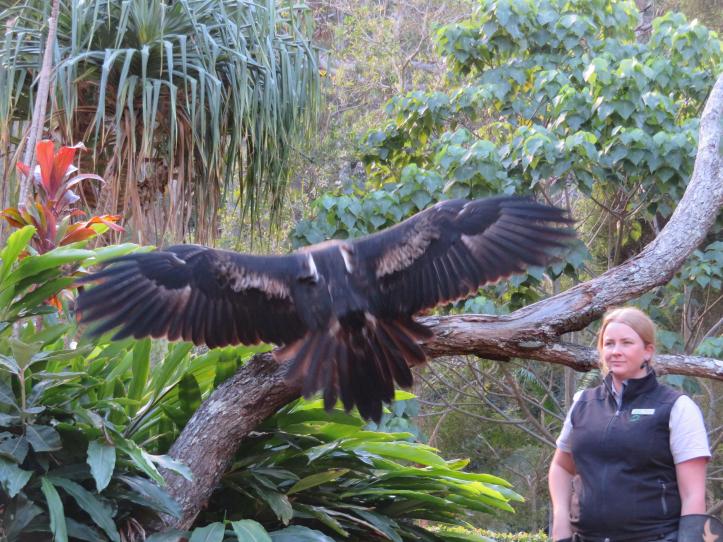 A new area recently opened is “The lost valley” I am keen to walk round having seen it advertised. I admired this artificial sculptured rock wall.

Then immersed myself in an environment that existed millions of years ago. Featuring 5 acres of stunning rainforest, Lost Valley takes you on a journey through the ancient supercontinent Gondwana.

In here are the wilder Australian animals, Dingoes, Tasmanian Devils, Wombats. But also some outsiders are here. 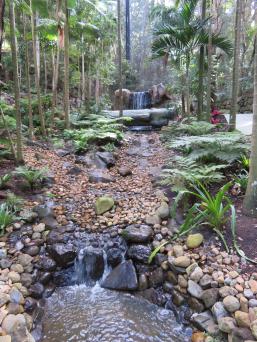 The scenery is created from artificial rocks and gives an ancient, primeval atmosphere. Over the top of the whole enclosure and about 15 to 20 metres high a net stretched so birds could free fly in the area.

It is starting to cool down, a slight mist is being generated from vents under rocks to give an eerie other world aura.

Leaving the family to watch the Aborigine show it is time for us to go home before all the crowds descend on the car park.

Jo is back from wandering overseas in the Algarve, but still walking. Here’s one to join in this week Jo. Pop over to “RestlessJo” to see where the world-wide walkers are going this week.