November is supposed to be the last month of spring, but summer arrived early this year it came almost a week ago on the back of hot, drying winds, gusting in from the west with dust ladened air from the dust-storms outback. The temperature soared to mid 30’s, 10 degrees above the November average.

A thousand kilometres north of here Central Queensland is consumed by 138 catastrophic wild fires. Consuming thousands of acres and last night a town of 8000 people were told to evacuate immediately. Fire fighters from other states flew in to help the exhausted Queensland fire fighters and with gale force winds whipping the flames to a frenzy they battled all night to save the town of Gracemere.

The news this morning is that, thankfully, the town is saved and the fire danger is decreasing. But still a threat with over 100 fires still burning.
Meanwhile a thousand kilometres south, in Sydney, the city has been brought to a standstill by cyclonic rains, up to 100mm in an hour causing streets and roads to turn into rivers and Sydney airport closed 2 runways.
Spring is leaving with a real sting to its tail…
But I want to share with you a very special and rare event in our garden.

The cycad has flowered. This prehistoric plant that was around when the dinosaurs roamed the earth, has finally flowered. It has been in the garden almost 20 years and has now reached maturity and produced this stunning phallic like creation. Needless to say this is a male plant. 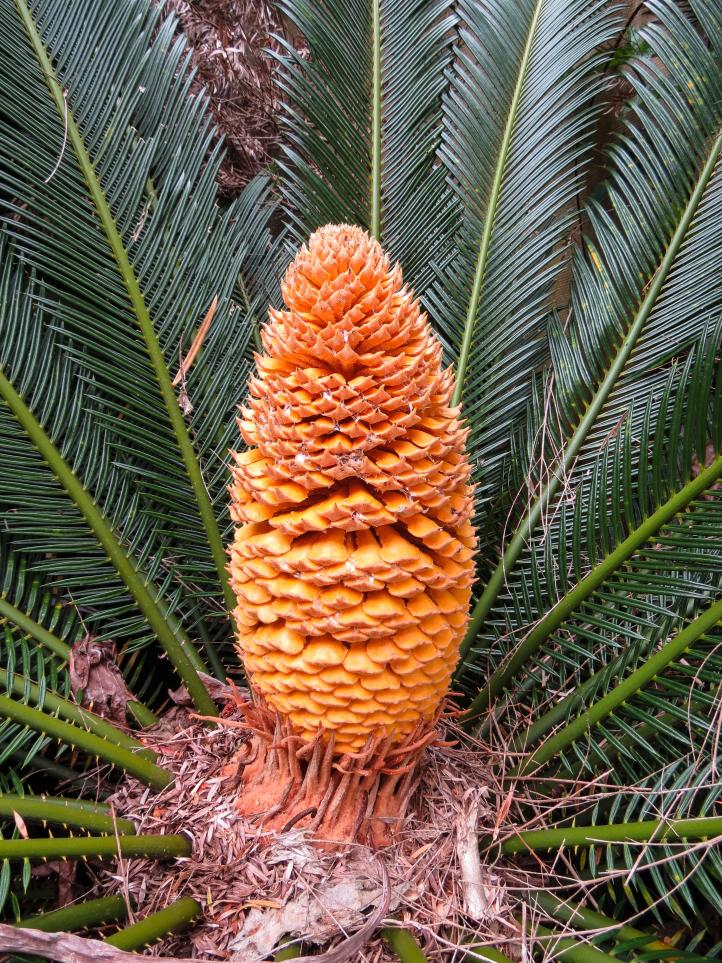 I’m also pleased that the new Grevillea is flowering. “Peaches and Cream”, such a delicate and lovely colour combination.

After the rather hit and miss affair with the paper daisies I grew from seed last year, this year I bought seedlings and they are putting on a stunning show, with the bright and cheerful French marigolds at their feet. . The real sign of the changing season and a sure sign that summer has arrived is the flowering of the exuberant, glowing Poinciana.

It has just started flowering and soon the tree will be smothered in a cloak of fiery, red flowers. See all the unopened buds scattered through the leaves? I will put an update photo in a couple of weeks.