Surprises on the way home…

After just a short 4 days away it is time to head home. The stay in the historic mansion lived up to its expectations and the last look at the autumn leaves was a highlight of the stay that will linger in my memory and the computer hard drive for a long time…

The plan was to meander along the Bruxner highway that twists and turns down the Great Dividing Range through the New England rolling country side back to sea level. 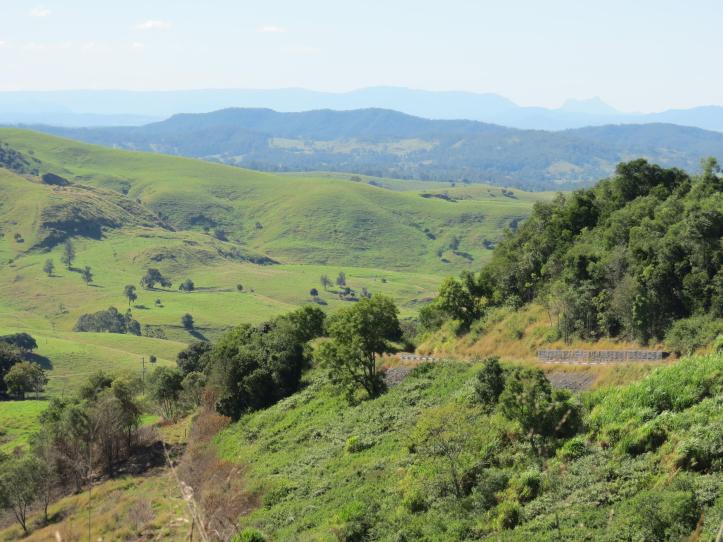 Stopping to take photos on the way.

The town of Lismore is on the way and it has an art gallery and will be a good place to stop for lunch.

Last year in March, during Cyclone Debbie, the Lismore river levee banks collapsed under the weight of water pouring down river.  Almost all of the extreme rainfall from ex-Tropical Cyclone Debbie fell within 24 hours. The 2017 floods in Lismore peaked at 11.59 meters. The damage bill for the 68% of Lismore businesses affected was estimated by the NSW government at just under 40 million dollars. (see photos and details here)

It is a long time since we passed through Lismore and in March 2017 during the time Cyclone Debbie wreaked havoc all along this area we were visiting family in New Zealand. So just over one year after this catastrophic event I was interested to see how the town has recovered.

First stop was the art gallery. This was relocated 6 months ago to this new location after the floods devastated the old building. It was light and airy and divided into quite small gallery areas. The first gallery had 8 videos arranged around the walls with various movie clips showing and head phones to listen to. It mostly depicted violent scenes and we passed it by. The next had paintings from their permanent collection. 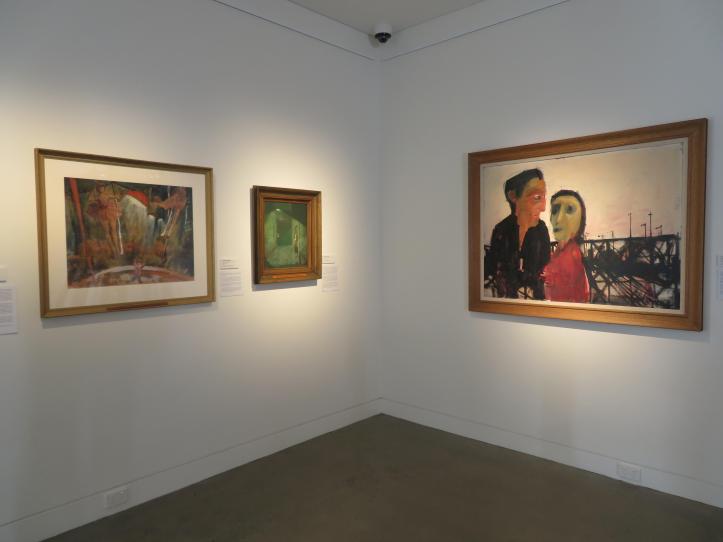 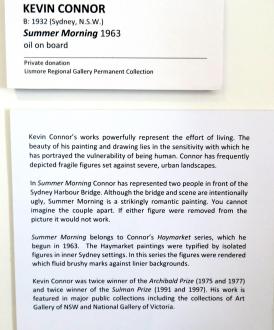 This one caught my eye and I must admit that at first I was not impressed, considering it rather childish. I’m always pleased when a description panel is alongside. After reading and then looking again, and again, I could start to appreciate what the artist was trying to portray. But I still would not hang it on my wall. I think my imagination is lacking, I need to have the finer details pointed out to me. What is your opinion?

The next gallery had found objects. 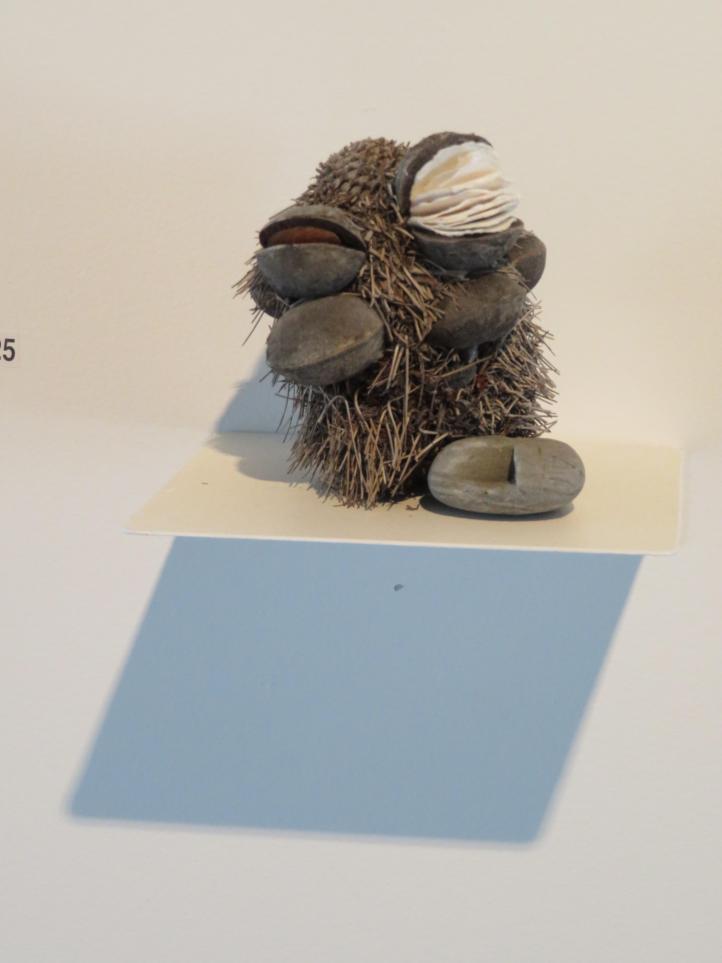 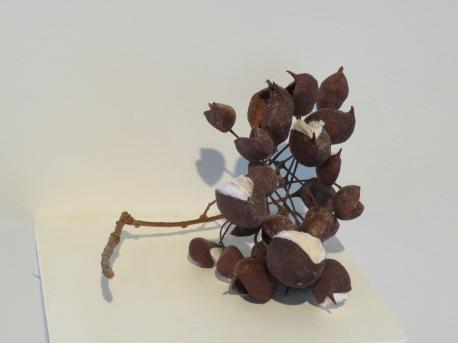 Quite small displays just stuck to the wall and small pieces of paper inserted into them. Jack was intrigued with these and took photos of every one. I wondered whether they could be classed as art.

This is what I saw when looking through the window and down onto the outside quadrangle. 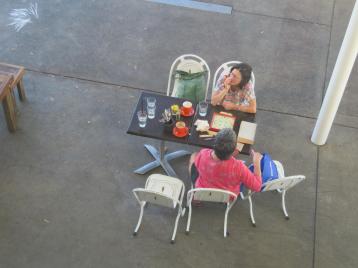 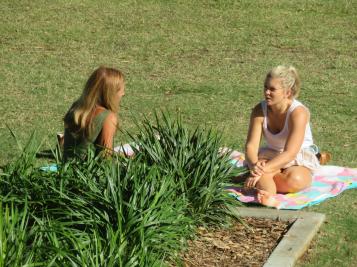 People enjoying each others company outside the café and making the most of a beautiful sunny day. So time to have lunch. While waiting for lunch we take out the sketch books. This building on the other side of the quadrangle appeals to me, I like the angles. It is the library.

While sketching another older couple, having coffee, start up a conversation. I find sitting sketching is often quite a draw card (excuse the pun!) They told us about the flood and the devastation it caused to the CBD businesses. For many their insurance didn’t cover the flood as it was classed as a natural disaster. The town has struggled with high unemployment. But it is slowly recovering. Our conversation ranged over many topics, art, marijuana, (the husband, very quietly, said he grew some) and then they mentioned the street art in the back alleys. My ears pricked up, this is something I didn’t know about and have to see. It is so exciting when, unexpectedly, I learn of a hidden gem in a town. 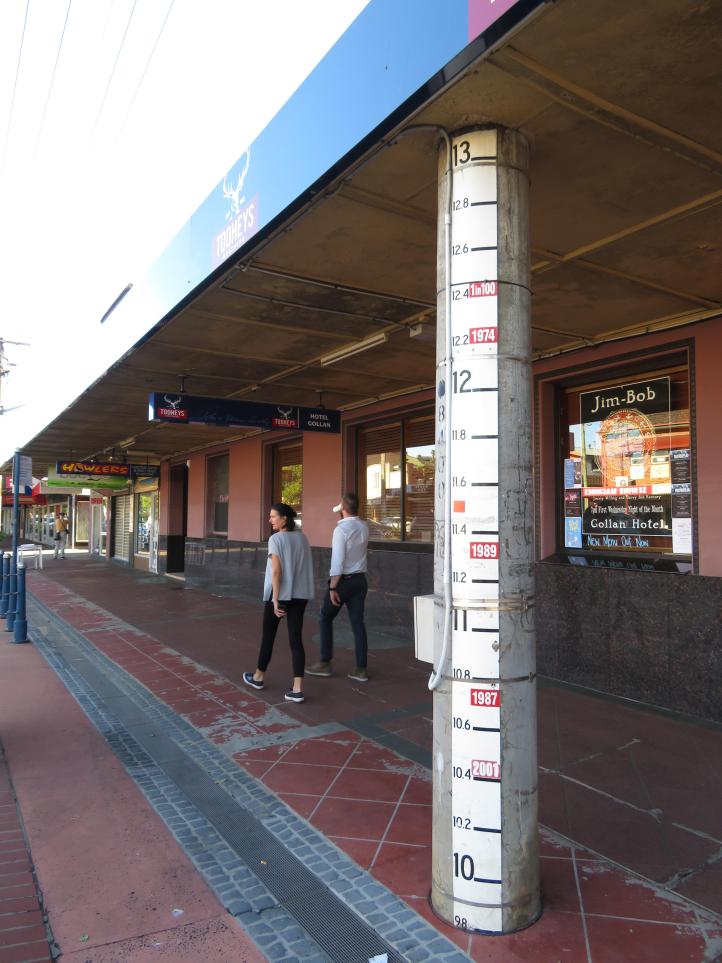 This post, along Main Street shows the depth of floods since 1987. The 2017 mark is not there yet, but it is just below the 1974 flood mark, that was the worst flood in Queensland history.

Now where are those back alleys? I have to ask a passing local and they point the way.

No wonder I couldn’t find them, that sign needs to be bigger. But look at all the alleyways marked on the map. With anticipation I turn into the first alley.

And the camera starts madly clicking. These are just the back entrances to the businesses around the CBD. Usually just for parking, rubbish bins, delivery trucks and a place to pop out for a quick smoke for employees. But 5 years ago the mayor decided the town needed revitalising. So the street art initiative was born. 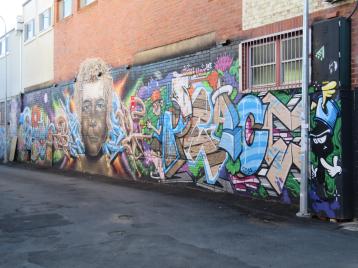 The Back Alley Gallery is transforming the laneways of Lismore. You cannot walk down the streets without finding something new on the walls. There are over sixty artworks including large scale murals, graffiti art, paste ups, stencils and installations. This outdoor art gallery is here for the community to enjoy and to see that street art is alive, thriving and an important part of the local art scene.

Over twenty five artists have featured to date on the laneway walls and come from Lismore, Nimbin, Byron Bay, Murwillumbah, Coffs Harbour, Brisbane and Germany. This project is part of an ongoing initiative by the Lismore Business Promotion Program which aims to revitalise the city centre, including the laneways.

There are so many and I think we just about photographed them all. But I will just pick out some to put into a gallery. Enjoy…. 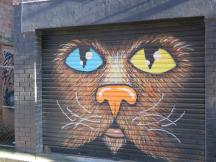 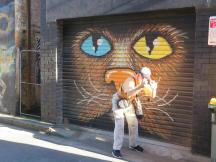 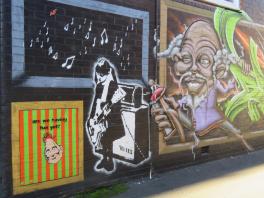 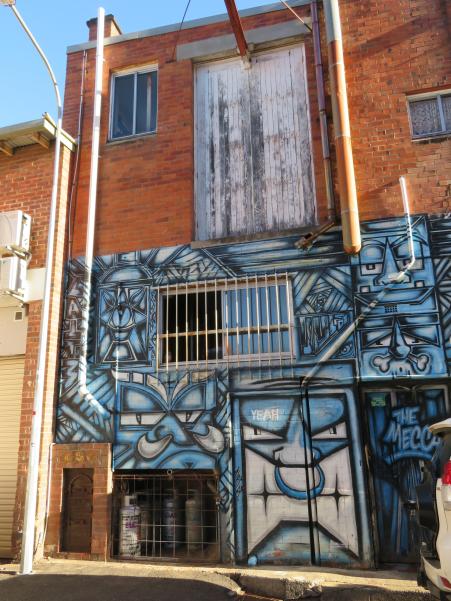 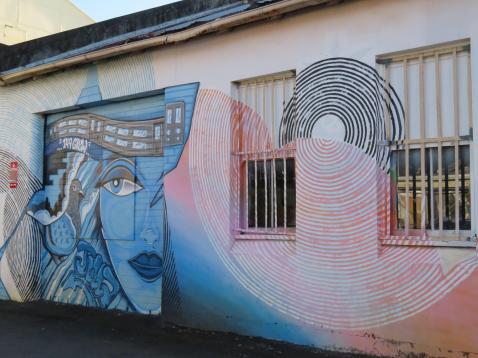 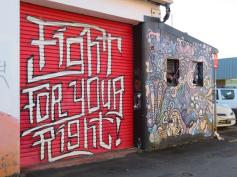 I don’t know how long we wandered around the back alleys, but eventually we emerged from the other end. But the surprises weren’t over yet because Thursday was twilight market. Around 30 stalls selling 100 per cent locally grown seasonal goods. Stalls include produce, seedlings, handmade cosmetics, cleaning products, candles, seafood, wines, cheeses, freshly baked bread, coffee, cakes, pickles, jams, dips and other home-cooked treats. 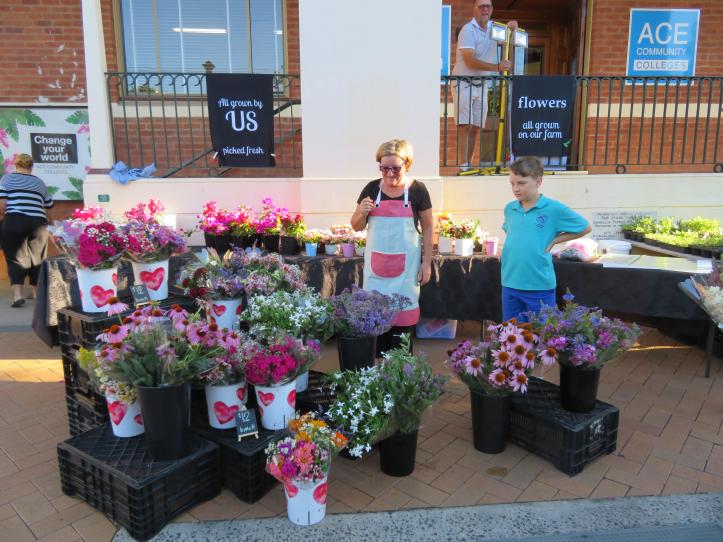 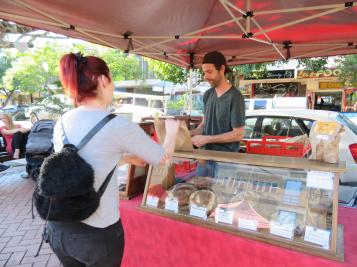 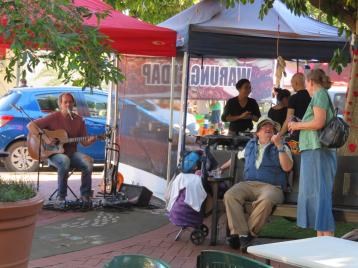 The happy sound of music drifted through the air from this guitarist and Jack sat and chatted with a local while I looked around.

The sun was slowly dropping to the horizon casting long shadows and creating haloes. Then look what we found at the end of the street… 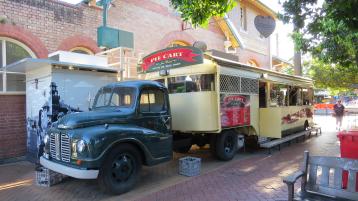 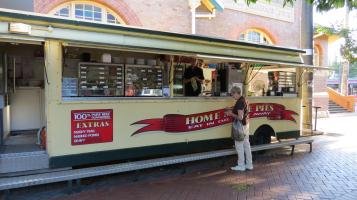 This is supposed to be one of the best pie carts in Queensland, if not Australia, so of course I had to buy us one each.

What a great way to end an incredibly interesting day, eating delicious, juicy meat pies on a bench in main street watching the sun go down. My original intentions were to stop at Lismore for a coffee and a quick look at the art gallery. Then be home before dark…

Now we head out of town as the sun just casts the last rays of golden light on the tips of the gum trees along the road. It is well after dark when two weary travellers arrive home…

Hi Jo I would like to join your happy bunch of world wide walkers this week. To see an absolutely glorious display of flowers go over to Restless Jo you are in for a treat.