Fishing lines, bee lines and lines in the sand…

Since coming home from Tenterfield the sunsets have been magnificent and a couple of days ago, from the front deck, I captured this reflected glow on the billowing cumulus clouds out to the east over the ocean.

This photo is as it came out of the camera, totally untouched.

Then a couple of nights ago I saw the same incredible clouds forming again over the ocean. I grabbed the camera.

“I’m going down to the beach” I called to Jack. “No let’s go to the lake for the sunset” he replied.

I was determined to see the reflected glow to the east over the ocean.

So we went our separate ways.

Jack to the lake looking west toward the setting sun (I have often posted sunset views over Pelican Lake, see here and here) And I walked, briskly, 1 kilometre along the street, to the east and the ocean. What different views we recorded.

As I arrived it was 5-30 and the sun was on the horizon behind me, the reflected glow to the south-east from the setting sun cast a halo of iridescent orange around the headland and the apartment blocks stand out in 3D relief. The evening was pleasantly warm and people strolled along the beach. The ocean was calm and the atmosphere peaceful. 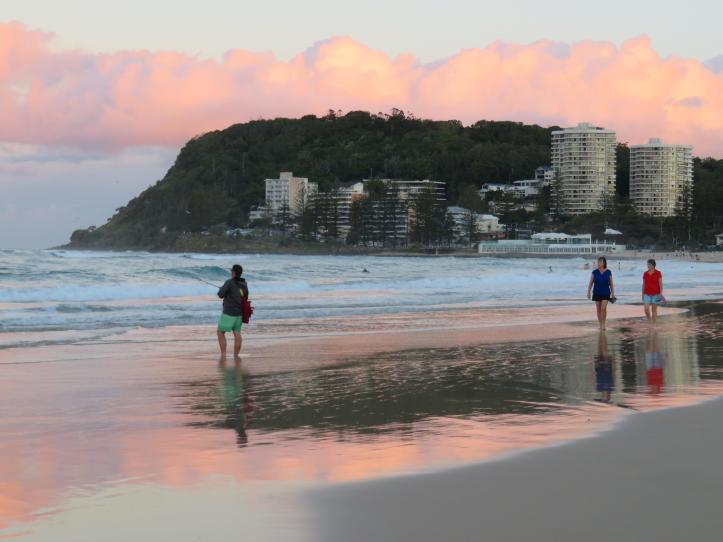 A fisherman casts a line across the waves as passers-by wander barefoot past him.

I turn and look to the north toward Surfers Paradise.

The receding tide leaves a line in the sand.

And the setting sun highlights the outline of the mighty, 78 story, Q1 building. When completed in 2005 it was the tallest residential building in the world, but has now dropped to 6th with 4 in Dubai and the tallest, at the moment, in New York.

Meanwhile This is a photo Jack took on the way to the Lake. I couldn’t believe my eyes. Autumn leaves!!! But no, it was a trick of the light, the setting sun had given these eucalyptus trees, or are they paper bark trees, a golden glow of autumnal glory.

At the Lake Jack found a woman and her dog having fun. 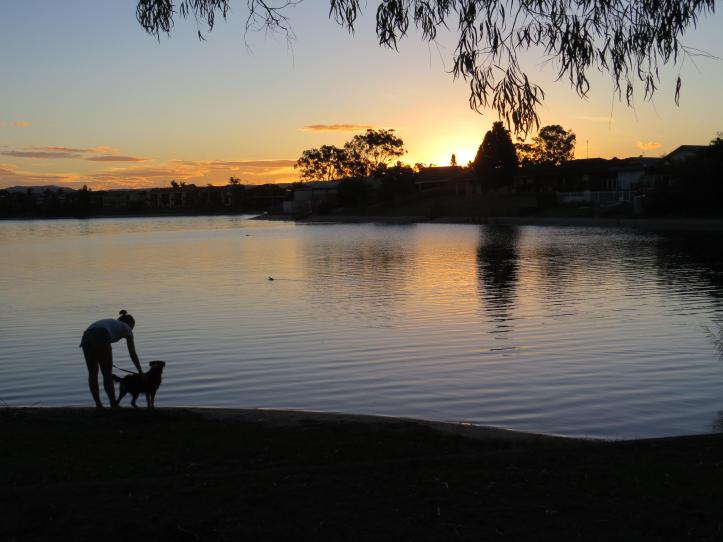 Can you see that blob on the water? It is a duck and the dog has its eye on it. 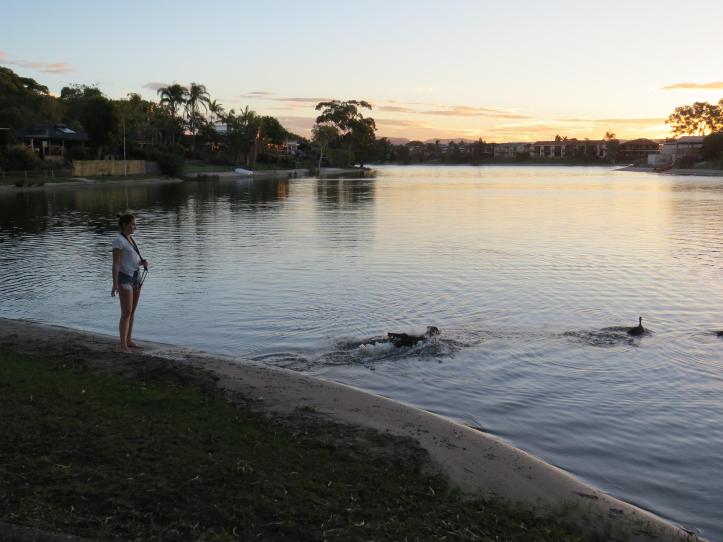 It launches itself in and, forget the stick, it makes a beeline for the duck.

So I hope you have enjoyed these two views of sunset, one from the west, across the Lake. Another looking east over the ocean. Both tranquil…